When DeWalt released their latest and greatest line of battery-operated tools – the FlexVolt range – there were heaps and bounds of fanfare. Because the company was hyping up their new range of cordless tools, we were naturally intrigued. One of their products that caught our eye, in particular, was the FlexVolt Reciprocating Saw.

The reciprocating saw sometimes referred to as a sawzall demolition saw or hackzall, is a very useful tool for making cuts where accuracy is not the major concern. 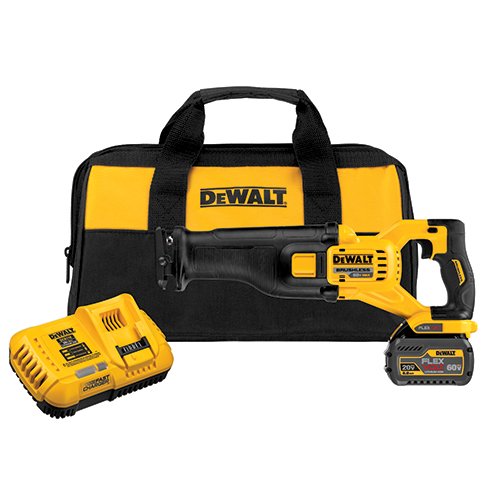 In this post we’ll be taking an in-depth look at the DCS388 FlexVolt 60V Max Brushless Reciprocating Saw, detailing its ins and outs, and helping you better understand what it brings to the table. Is this saw really all that it claims to be? Let’s find out.

What Exactly is FlexVolt Technology?

DeWalt’s FlexVolt cordless power tools have been designed to run on one or two 60V MAX FlexVolt batteries, which are backward compatible with their 20V power tools.

These battery systems are more flexible than regular batteries of cordless tools since they are self-regulating; depending on which tool you mount them to. The 60V FlexVolt batteries provide you with an easy-to-use solution for using most of your DeWalt cordless power tools.

We were amped to see that the 60V Brushless Recip Saw features an LED light that illuminates the workspace while you’re using the saw. This also happens to be a feature that most folks are demanding to see on corded and cordless power tools these days.

The reciprocating saw from DeWalt’s FlexVolt range comes with a keyless blade changing system and the fact that the trigger sports variable speeds just adds more value to the overall deal. When it comes to the adjustment of the shoe, it’s not tunable beyond the pivoting adjustments, which might or might not be a big deal for some users.

Another nice feature about this particular saw is the fact that most of its body is covered with a rubber over-mold, which is grippy and very comfortable to use. As a side note, this reciprocating saw doesn’t have a rafter hook, which was a bit of a let down upon the first inspection. 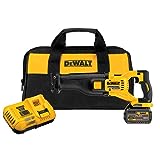 How Well Does The DeWalt 60V Sawzall Perform?

A lot of users have reported that the FlexVolt 60V MAX Brushless Reciprocating Saw delivers bucket loads of power, offering you the ability to power through wood unlike any other tool in its category.

Although it is extremely powerful and will cut through thicker materials much faster than most of its competitors, the FlexVolt battery system is a little on the heavy side, which can slow you down considerably.

While cutting, you’ll benefit from the sheer amount of control you have over the whole process, and thanks to the clever design of the saw, vibration is down to a minimum while in use.

Because the saw runs at 60V Max (54V nominal), it seems like it might just be able to accomplish what other cordless saws in its class simply can’t even dream of.

In terms of cutting performance, the DCS388 performs pretty well and has the ability to cut treated 2 x 12’s within 20 seconds. It doesn’t measure up to the likes of Milwaukee, but we reckon that it would have been able to perform much better if it featured orbital cutting action.

Some users have reported that when placed under heavy loads, the DCS388’s ergonomics are a little shaky. One of the biggest factors in play with the ergonomics factor was the saw’s weight, and when combined with the minimal operational vibration, it can really fatigue your arms pretty quickly.

What Are Some of The Best Features? 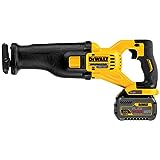 This reciprocating saw boasts a pretty basic set of features when compared with a corded reciprocating saw, but features such as orbital action, seem to be missing from this saw, much like can be observed in its contenders.

That being said, the FlexVolt Reciprocating Saw still has quite a few great things going for it. For starters, it runs on a much higher voltage than any other cordless reciprocating saws currently available on the market.

This saw runs at roughly 3000 strokes per minute and has a stroke length of around 1-1/8 inches. With the help of an LED running light, any dark areas on the working surface get illuminated.

Add a variable speed trigger to the mix, and it becomes pretty much evident that this saw offers you more than enough control over the cutting process. As far as blade changes are concerned, they are super easy to do and just require you to use the blade lever, located on the outside of the upper housing.

A lot of folks tend to nag about the fact that this saw lacks the ability to adjust the length of the shoe. It will still pivot, but it cannot be used to get more or less length out of the blade. As a side note, the rafter hook is also missing, and although it’s not an essential feature, it’s always nice to have.

What Are The Downsides to using the FlexVolt 60V Reciprocating Saw?

When you first start using the tool, you’ll need to overcome a few challenges, the first one being the tool’s weight. As a bare tool, the reciprocating saw has a total weight of 7.76 pounds, but as soon as you add the FlexVolt battery pack, that number jumps up to 10.08 pounds.

Other than that, you’ll have to get used to the grip of the contoured rubber over-mold of the handle, but it offers a very comfy grip once you get acquainted with it.

Specifications of The DeWalt Brushless Sawzall

Suitable for cutting:    metal and wood

Although we love the idea of the FlexVolt 60V MAX Brushless Reciprocating Saw, we have to admit that it looks like there’s room for improvement. The addition of orbital cutting action would greatly enhance this cordless power tool’s cutting performance, and even though it seems to be a market leader, you might be let down if you didn’t keep this aspect in mind before making a final purchase call.

We reckon that some folks might be able to forgive the hefty weight of this tool, merely because it delivers oodles of power and essentially performs great. With the addition of some anti-vibration technology on this reciprocating saw, it could easily become the leader in its field.

It’s on the frontier of cordless tech, and if you’ve already jumped onboard the DeWalt FlexVolt bandwagon, this will make an ideal addition to your preexisting collection.