According to the National Climatic Data Center, Syracuse in New York receives the most snowfall on an average annually. The average snowfall recorded in this state is 123.8 inches a year. Other states that follow in terms of the highest average snowfall are Wyoming, Vermont, West Virginia and Alaska, all four of which recorded an average of 60-70 inches of snow each year.

New York, on an average, receives 66 days of snowfall each year, while Wyoming and Vermont receive snowfall for an average of 54 days and Alaska 48 days each year.

On the other end of the spectrum with the least amount of snowfall are Florida, Louisiana and Hawaii. These states received less than one inch of snowfall last year. Hawaii receives no snowfall at all during the year as it is located in the low latitude area.

You can find the source of this data here

States With The Most Snowfall In The US 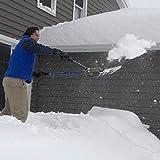 New York, which normally records the highest average snowfall, also records lesser amounts of snowfall (averaging between 22.7 to 37.9 inches of snow each year) a single stage battery operated snow blower may be appropriate for these areas.

Places such as Watertown, Old Forge, Syracuse and Lake Placid, on the other hand, all recorded over 100 inches of snowfall on an average, that would definitely be a reason to have a powerful gas powered two stage snow blower available.

Does it snow in Wyoming? You betcha!, Wyoming places second after New York, averaging 91.4 inches of snowfall each year.

Places such as Yellowstone Park, Old Faithful, Yellowstone Lake, Moran and Moose averaged snowfall of over 160 inches on an average each year.

Other places in Wyoming such as Alta, Lander, Sundance, Sheridan, Jackson, Yellowstone Park, Mammoth, Kemmerer, Ten Sleep, Gillette, Devils Tower, Cody, Evanston, Rock Springs, Riverton and Buffalo recorded an average snowfall between 36 and 100 inches. This is ideal work for the Husqvarna ST224P review here. Or maybe that could be a choice between whether to purchase a single stage or a two stage snow blower.

Third on the list, Vermont usually has an average snowfall of 82 inches each year.

Places in Vermont that have recorded high averages are Cavendish with 85.2 inches, Woodstock with 80.8 inches, Rutland with 72.9 inches, Montpelier with 94.2 inches, Rochester, South Lincoln with 124.3 inches, Mount Mansfield with 243.6 inches and St Albans with 80.6 inches.

The state of Alaska that comes in at number four has an average of 74.5 inches of snowfall on an average each year.

Places such as Annette Island, Juneau, Sitka, Anchorage, Gulkana, Homer and Seward recorded an average between 32 and 74 inches of snowfall for the year.

Other States With Notable Snowfall

Other states that featured in the top 10 with an average snowfall between 50 and 60 inches are West Virginia, Maine, New Hampshire, Utah, Minnesota and North Dakota.

States that received an average of 30 to 40 inches of snowfall each year are South Dakota, Massachusetts, Connecticut, Montana, Iowa and Rhode Island, making a battery powered snow thrower a good choice for these locations.

States such as Pennsylvania, Ohio, Indiana, Nebraska, Illinois, Nevada, Delaware and Maryland received an average snowfall of 20- 30 inches each year.

It can be profitable to start some woodworking projects to sell during the winter. That way, you’ll have some items in stock ready to sell in the spring.

Does It Snow In Florida?

Very rarely, it does snow in Florida, when it does happen, it’s generally in the far north of the state, and it’s not a significant amount of snowfall.

Does It Snow In Dallas?

It does snow from time to time in Dallas, an average of 3″-6″ is about the norm. Sometimes, it does get heavier snowfall, but you’d hardly call it Arctic.

Does it Snow In Hawaii?

You’re more likely to need weedeater string than a snowblower!

You may also like our review of chainsaws for women here.