We’ve all been there. We just cleared the snow in two or more hours of back breaking brushing and shoveling. Then it goes and snows again overnight and you’re back to square one!

If you or your body has finally had enough, then what’s your best option?

A snow blower (or snow thrower if you like) is the first thing that will spring to most people’s minds. Of course, if you live in an area that gets more than the occasional 2 inches (5.08 cm) of snow per season, then a snow blower is an absolute must. A light covering of powdery snow can be blown away with a backpack leaf blower if you have one to hand. 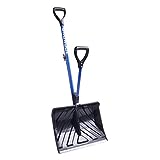 No surprise then that one of the questions we get asked a lot around winter time is what sort of snow blower should people buy. Single stage, dual or two stage or maybe even three stage? There just seems too much choice these days.

Always trying to help our readers out, we’ve put together this simple guide to give you all the info you need. Once you’ve had a read through this you will know everything there is worth knowing about snow blowers. We will try to keep it light and entertaining so you don’t go into information overload hopefully!

How do snow blowers work?

Before we look at the different types, it’s a good idea to understand how these machines work, as they all have the same basic function.

Even though we’re just talking about residential snow blowers here (i.e. ones the average homeowner would use) they all work in the same way.

They have a blade at the front that looks a bit like a corkscrew called an auger. It’s mounted across the machine so that as it moves forward it cuts into the snow and pushes it to the back of the auger housing.

On top of the housing is a discharge chute that throws this waste snow in whatever direction you choose.

There are obviously different variations on this theme and various ways of getting it to move but that’s about it!

What is the difference between one stage, two stage, and three stage snow blowers?

Now we understand the basic setup, let’s take a look at the different types you can get.

The most basic type is called a single stage snow blower. This pretty much is what we’ve described above. The auger that gobbles up the snow also provides the power to throw the snow out of the chute. Hence the name single stage, as it has just the one stage of gathering and throwing all in one go.

Surprisingly these machines can actually throw the snow up to about 30 feet away so the system works pretty well. The auger on the single stage machines is usually made from polyethylene plastic or a hard rubber material.

You will have a motor of some sort to spin the auger, but apart from that no other moving parts. They come in different sizes from 15-inch to 22-inch cutting width and some have better controls but that’s about it

Single-stage machines also use the auger to pull themselves along to some degree, enthusiastically called an ‘auger drive’ by manufacturers. There is a fair bit of manual pushing involved as well so be warned.

These machines are quite light and easy to use so any able-bodied person would have no trouble using one.

Two-stage snow blowers are next and these add another fan, called an impeller, into the chute to process snow faster. This also adds to the throwing power and some of these machines can throw it up to 50 feet!

That means you have an auger to cut and gather snow and an impeller to throw it back out again, two stages that give these snow throwers their name.

The engines in these beasts are usually more powerful as they also provide power to the larger wheels so that the blower is self-propelled.

That means you drive these rather than push them. Good job too as some of them weigh up to 470 lbs. They come in a range of sizes, from 20-inch cutting width up to a 45-inch beast believe it or not!

The controls on the 2-stage machines can get very sophisticated with 8 or more speeds, different types of drive and remote controls for the chute.

They are larger and heavier than single stage machines but with their powered wheels most adults who are physically fit can operate one of these.

The final type of snow blower adds another auger or accelerator in front of the main one to chew up the snow even faster. That addition now gives it three actions and so these are called three stage snow blowers.

A 3-stage machine will usually have a more powerful engine but apart from that and the additional auger, they look much the same as a 2-stage machine.

What type of engines are used on these snow blowers?

Gas powered single stagers are usually the most powerful but require a fair bit of maintaining. They also tend to be bigger and heavier plus are quite noisy.

Corded electric machines, on the other hand, are quieter, eco-friendlier and a lot lighter. In the past, they could not match up to gas-powered blowers in terms of snow moving capacity, but the gap is rapidly closing if not closed already.

The downside, of course, is that you have to be in reach of a power socket. With recent advances in battery technology, battery powered cordless electric snow blowers are now catching up and offer a real alternative to both corded and gas-powered single stage blowers.

Two stage snow blowers and throwers up to very recently were only available powered by gas engines. In late 2016 however, Snow Joe bought out the first cordless model of 2-stage machine and it works rather well.

We’ve done a full review on the Snow Joe cordless snow blower that you can find here if you want to take a closer look.

Three stage snow blowers are currently only available with a gas-powered engine as they need a lot more power than an electric engine can provide. At least at the time of writing anyway.

So, which one should I go for?

There must a simple way to work out which type of snow blower is best for any type of situation, yes?

Well, of course there is! Just follow our guide below and you will be picking out the best choice in no time.

We will not consider 3-stage machines here as if you need one of those then you most likely have a lot of ground to clear of deep snow, (like an airport or similar!). In which case, you probably have a good idea what you are looking for already.

From a snow clearing point of view, there are two things to consider; how much snow you usually get and how much land you have to clear. Also, the type of terrain will come into it. OK, ok… so three things to take into consideration then!

First of all, we actually need to think about the terrain i.e. what sort of driveway or pathways you have, any slopes etc. etc. If you have a gravel or dirt surface anywhere then a single stage is out. That’s because the auger in a single stage scrapes the ground so any stones or loose dirt will be scooped up and thrown with the snow, and it will also likely damage the auger.

If you have a lot of sloping ground a single stage machine will most likely be too hard to push around so they are also out for that reason.

In either of those two situations, a two-stage blower is going to be best for you. Check out our article on the Best 2-stage Snow Blowers for some great models we recommend.

Now let’s take the person who has a small, single car driveway and maybe just a few short footpaths to clear. In this case, a single-stage snow thrower would be ideal, even if you live in an area that gets heavy snowfall now and again. You may need to use a shovel as well as your blower to dig yourself out, but it’s probably not worth getting anything bigger.

A gas powered, corded or cordless electrical snow blower will all cope with this so just pick the one that suits your lifestyle.

The next case would be someone who has a medium to large sized driveway, say 2 or 3 cars wide and maybe over 50 feet long. Perhaps this person also has some longer pathways to clear or some sidewalks.

Let’s first assume they live in area that gets 1 or 2 inches fairly often, up to 6 inches of snow now and again and only very rarely anything deeper.

A gas powered single stage blower with a wide cut would be best suited to this type of scenario. A cordless electric one might be ok as well but a corded one would possibly be too restrictive.

If they get more snow than that, so thinking regular medium to heavy snowfall, then a 2-stage machine is going to be needed, without a doubt.

Finally let’s take the person who has a large driveway, maybe 100 foot plus in length and some long pathways or sidewalks to clear.

If this person lives in an area that only gets 1 or 2 inches of snow and rarely anything more than that, then a gas powered single stage blower will cope.

Anything more than that, then a two-stage snow blower is going to be the best bet.

We have lots of reviews of single and two stage snow blowers or throwers right here on our website, so take a look around to find something you like.

A good place to start if you think you need a 2-stage machine is our article we mentioned earlier, The Best 2-Stage Snow Blowers.