When DEWALT first introduced their FLEXVOLT range of power tools, it seemed like it would be a quick craze, but how wrong that idea was. With their Lithium Ion tech, DEWALT soon changed the minds of thousands of tradesmen out there who never believed in the fact that battery power could stand up to the likes of corded tools. And now, DEWALT has surprised us all again, with the introduction of their table saws.

So far, we’ve been seriously impressed by the power of the FlexVolt 60V MAX Cordless Circular Saw, which is why we reckoned it would be a great idea to put the DEWALT FlexVolt 60V Table Saw to the test. Since the FlexVolt Table Saw runs on just one 60V battery, can it really tackle the toughest of applications? Let’s find out… 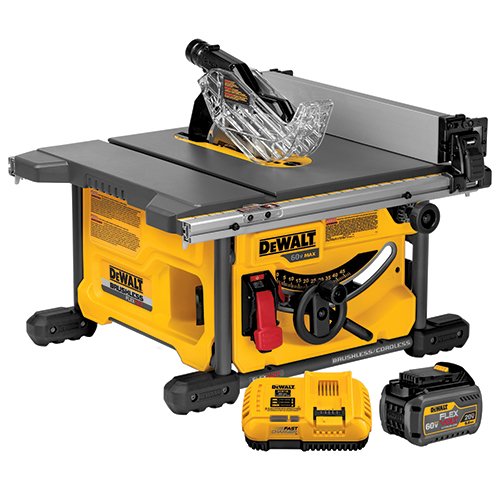 Measuring up at roughly 13 inches high and 23 inches square, the DEWALT FlexVolt 60V Table Saw has an overall weight of 48 pounds, arguably qualifying it as one as the best power-to-weight ratio table saws currently available on the market.

It comes with a comfy handle for carrying, and yes, it’s light enough to be carried with one hand.

Because the FlexVolt 60V Table Saw comes with many of the cool features that can be found on the Full-Sized DEWALT Table Saw, it’s a great tool to use for a wide range of applications.

Featuring the likes of telescoping, rack-and-pinion fence (with a swing arm for large material support), dust collector adapters, tool-free adjustment for the riving knife and guard, table coating, and onboard storage for wrenches, the blade guard, and miter gauge, it seems like a complete package.

Most corded saws don’t come with dust collection shrouds below their blades, but the FlexVolt 60V Table Saw does, and it helps to channel waste towards the dust collector. It also sports large rubber feet, powerful cordless tech, a Power Loss Reset, and a brushless motor.

Another great aspect about the DEWALT FlexVolt 60V Table Saw is the fact that its 8-1/4 inch blade has a thin kerf, 5/8-inch arbors, and a design specific to the FlexVolt cordless power tools.

DeWalt made a bit of a trade-off for this powerful tool to be able to run on battery power because normal table saws have blades measuring in at 10-inches thick. With the ability to spin at 5,800 RPM at no-load speed, this saw can cut 1-3/4 inches at 45° and at 90°, it does a solid cut of about 2-1/2 inches.

For this saw’s compact profile, we reckon that 24 inches of ripping capacity to the right of the blade and 12 to the left are as good as its going to get.

The FlexVolt 60V Table Saw is insanely powerful, utilising the latest brushless motor technology, and according to the plethora of positive reviews out there, one would find it hard to imagine that such as small, portable power tool could handle working hard and fast on a construction site, but it does.

Some users have reported cutting 3/8 inch strips of 2×4 PT at full depth without the tool failing them once or leaving them wishing that they had just used a corded table saw instead of messing around with a cordless tool.

Some of the FlexVolt 60V Table Saw’s Most Remarkable Features

What we love most about the 60V Table Saw is the fact that it operates smoothly. It has a fence which is incredibly easy to take off, and for placing it on again, the pins are very handy.

The table saw’s table moves on the rack and pinion system, unlike most corded versions that rely on the sliding the fence to get the job done. This means that the 60V table saw stays true and locks down remarkably well.

The addition of this feature ensures that you’ll be able to push the piece of wood through the cut without risking the idea of letting the stock lift from and around the table, essentially assisting in creating safer and cleaner cuts.

With the addition of the FlexVolt 60V Table Saw’s safety guard over the switches, it will help to prevent you from accidentally turning the tool on since you’ll need to lift the red paddle up in order to engage the motor.

If you press the red paddle, the machine shuts off, and in the event of the battery dying during cutting applications, the saw automatically defaults to the ‘off’ position, make it safe to replace the battery without risking an injury from the machine turning itself back on again once power has been restored.

This feature is referred to as Power Loss Reset. 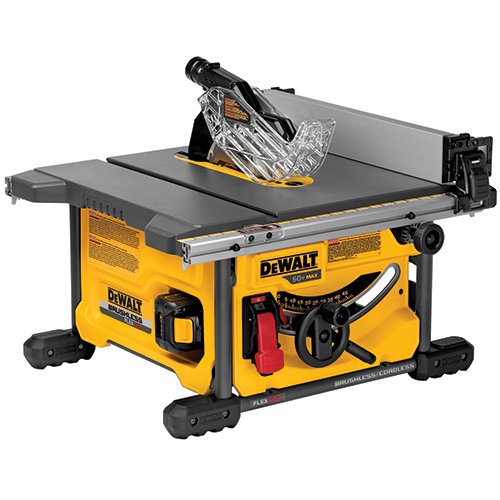 Room for Improvement in the FlexVolt 60V Table Saw?

We reckon that if this tool came with an AC adapter, it could very well be dubbed as one of the best power tools ever manufactured. For obvious reasons, the FlexVolt 60V Table Saw’s flexibility is impaired, but to make up for that, DeWalt would have to increase the price tag by tenfold, not to mention the engineering challenges that would need to be incorporated.

If the kit came with a 9Ah battery instead of a 6Ah battery, it would offer more of that trusty DeWalt FlexVolt power for extended periods of time. We’re not insinuating that the saw doesn’t perform well with the 6Ah battery, but a 9Ah battery just extends the saw’s portability and lifespan during use. Couple the capabilities of this machine with the DeWalt compound sliding miter saw, and you”ll be able to conquer an impressive range of jobs.

What is Included With the Purchase of a DeWalt FlexVolt 60V Table Saw?

When purchasing the tool kit, you’ll get:

How much runtime can you expect from the FlexVolt 60V Table Saw?

DEWALT states that you’ll be able to rip 302 linear feet of OBS plywood with a single battery. Some users have reported processing a ton of lumber, using the saw to size exterior trims on sun-rooms, and still got two days’ worth of cutting on a single charge. It might be well worth your time to consider the idea of investing in an additional battery for backup while working with this cordless table saw.

Is The Saw Easy to Assemble and Adjust?

The good news about purchasing the FlexVolt 60V Table Saw is that it basically comes pre-assembled straight out of the box. All of the DEWALT FlexVolt cordless power tools are easy to true up and tune in, and since they stay true over time, the adjustments aren’t needed as often as with most other cordless power tools on the market.

How Durable is the DeWalt FlexVolt 60V Table Saw?

Like all of its corded counterparts, the DEWALT FlexVolt 60V Table is extremely tough and durable. Because this saw features a metal roll cage, it’s well protected, and it even comes with convenient pivoting handles for easy carrying. To help keep the fence, guard, wrenches, and miter gauge safe and secure, the onboard storage is really handy and much appreciated. 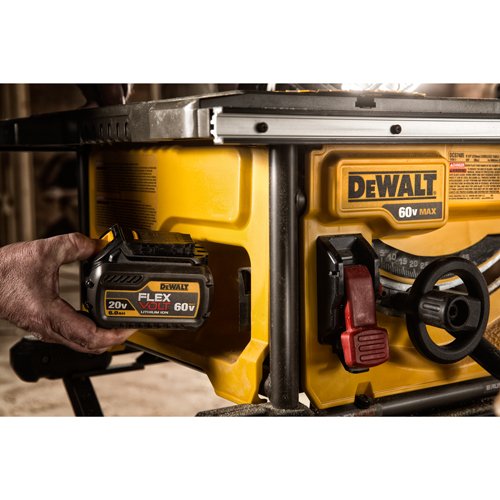 How Does the DeWalt FlexVolt 60V Table Saw Collect Dust?

Corded DEWALT table saws feature 2-1/2 inch dust ports at their lower rear end, but the FlexVolt 60V cordless table saw has a 1-1/2 inch dust port, which is located at the top of the blade guard, allowing for dual dust collection capabilities as you’re working with the tool.

With the addition of this feature, your saw will collect dust above the blade as well as in the lower blade housing, making it a very effective and efficient dust collection process.

Keep in mind that you will need a “Y Connection” to rig this saw up to one vacuum. Hopefully, DEWALT plans on introducing a “Y Connection” as an additional, aftermarket accessory one of these days.

What Stand Should You Use With The FlexVolt 60V Table Saw?

DEWALT recommends using their DW7451 saw stand, which should be available to order online from the manufacturer. They made special changes for this table to accept the cordless table saw, and special emphasis should be placed on using the correct stand if you have purchased the Type 2 saw.

When it comes to investing in a great cordless table saw, you want and need two things: power and capacity. The DEWALT FlexVolt 60V Table Saw doesn’t have a 10-inch blade – like most corded table saws – and it has a max 2-1/2-inch cutting capacity which relies on a single battery for its source of power, but it still delivers more than enough power for just about any applications you have in mind.

One of the only major trade-offs we could identify in DEWALT’s FlexVolt 60V Cordless Table Saw is the fact that it has a smaller blade than most of its corded counterparts, but that doesn’t make it any weaker when it comes to performance.

As one of the most powerful budget-friendly portable table saws currently available on the market, the DEWALT DCS7485B FlexVolt has been fine-tuned for maximum accuracy and performance.

It eliminates the need for AC power and doesn’t slack on performance like most other battery-operated power tools.

We’d be more than happy to recommend this product to anyone looking to invest in a powerful, functional, and very versatile battery-operated table saw that wouldn’t break the bank!