Sliding compound miter saws have become increasingly popular among DIYers and carpentry professionals alike, and for several great reasons. This type of miter saw is not to be confused with its compound or dual compound counterparts, and here’s why!

Just as the name would suggest, sliding miter saws are equipped a blade that slides out to crosscut wider boards up to 12-inches, while still providing the same benefits of non-sliding miter saws.

When on the shopping trail for the best compound miter saw, the DeWalt DWS779 and DeWalt DWS780 models lead the pack, owing mostly to the unmatched versatility, precision and performance they provide on the shop floor.

But since both these woodworking machines are manufactured by the same leading brand, many consumers ask what’s the difference between the DeWalt DWS779 and DWS780 sliding compound miter saws. So, without further ado, here’s a detailed look at the two models, and why the DeWalt DWS779 is perhaps a better deal!

The DeWalt DWS779 double bevel sliding compound miter saw boasts a robust build, and offers top notch performance under its hood. It measures 32.77 x 19.05 x 20 inches, and tips the scales at just 56 lbs, making it easy to move around the shop floor.

Further, the DWS779 miter saw by DeWalt is a great choice for both hobbyists and professionals, and for a wide range of applications that require precision cuts including crown molding up to 7-1/2 inches. It is powered by an industry leading 15-amp, 3800 RPM motor that delivers outstanding power, and maintains a long service life.

The DeWalt DWS779 saw is factory fitted with a 32T carbide blade, which stays sharper for longer compared to stainless steel blades, and provides fast cutting abilities, consequently reducing the load on the tool. The blade offers a 0 – 48-degree bevel capacity to the left and right, and positive stops at 22.5 °, 33.9° and 45°.

Adjusting the bevel is pretty straightforward, and can be done by loosening the thumb screw to slide the fences as needed. The miter scale of the DeWalt DWS779 sliding compound miter saw is nicely finished in stainless steel, and features clear markings that are easy to see even with less than perfect vision.

You can adjust the miter scale angles easily if they are a bit off in 1-degree increments up to 50° to the left and 60° to the right. Then you have multi-detents at 0°, 15° and 22.5°, and an easy to access thumb button to release the detents.

With the DeWalt DWS779 sliding miter saw, you can lock at other angles as well by pushing down on the onsite lock lever, and lifting up to release it. Just like most DeWalt top models, the DWS779 miter saw from DeWalt allows you to cut dadoes easily with its integrated small steel flip down lever, and an adjustable set screw.

In terms of dust collection, there’s good news and bad news — the dust collection bag is easy to mount on the saw, but on the downside the boot of the dust collection system is too short, hence less dust is collected. Getting to safety, the DWS779 miter saw comes with standard features including a transparent blade guard.

The DWS780 is another best selling miter saw from the DeWalt hangar, and is a great choice for those looking to achieve a maximum cutting capacity coupled with a relatively compact footprint. This heavy duty miter saw can cut through tough timbers, measures 33 x 23.8 x 18.8 inches, and weighs 56 lbs, making it easy to carry and store. 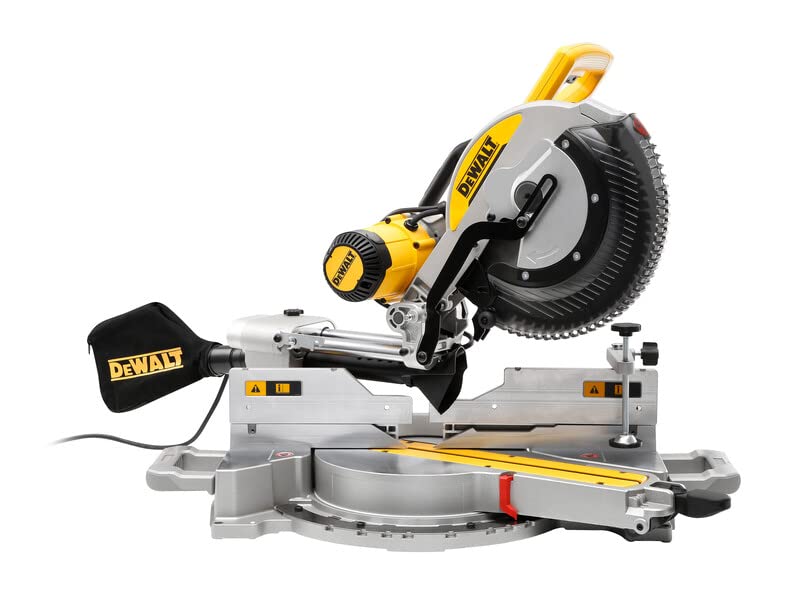 The DeWalt DWS780 miter saw is fitted with dual horizontal steel rails, which along with the onsite innovative clamping mechanism and linear ball bearings enhance the tool’s accuracy, and durability.

Additionally, it comes with a dual bevel, and a bevel detent system, which collectively allow you to setup your bevel and make compound cuts, without having to flip the board over for each end. The DWS780 miter saw features a large bevel scale, so you can make accurate and easy bevel angle adjustments.

The miter detent plate of the DWS780 dual bevel sliding compound miter saw is made from industrial strength stainless steel. In terms of performance, the DWS780 miter saw scores high, thanks to the company’s powerful 15 Amp, 3,800 rpm motor that delivers unmatched power, and service life. It is equipped with tall sliding fences, so you get the right level of support for crown molding up to 7-1/2 inches, and base molding up to 6-3/4 inches vertically against the fence.

The miter detent plate is made from industrial strength stainless steel, and can be adjusted between 10 positive miter stops for increased productivity, and cutting accuracy. Unlike cheap miter saws in the market, the DWS780 comes with a highly efficient dust collection system, which the company claims captures over 75 percent dust.

Another key feature of the DeWalt DWS780 saw its factory fitted CUTLINE Blade Positioning system. This crosscut position system performs far better than any saw laser system in the market, and works by shining a light on the blade to indicate exactly where the cut will be made on the workpiece.

The DeWalt DWS780 miter saw rests sturdily on a robust base, so you can work with large size timbers with great stability. It features an innovative gearbox and belt drive design for better vertical cutting capacity, and comes with a 12-inch carbide blade, blade wrench, dust bag, a 90-day money back guarantee, and three-year limited warranty.

The DeWalt DWS779 and DWS780 are robust dual bevel compound miter saws that are an ideal choice for busy work environments. Both offer myriad similarities, starting with a powerful 15 Amp motor, and a 12-inch carbide blade that spins at an impressive 3800 RPM.

Adding to the list of similarities, both tools weigh 56 lbs, and feature the same back fence design to cut 2×16 dimensions at 90 degrees and 2×12 at 45 degrees. The miter of the DWS779 and DWS780 miter saw is adjustable across several angles, and both tools come with the same dust collection system with a dust bag, and class leading 12-inch carbide blades.

But the DWS779 and DWS780 aren’t exactly the same! Getting to the biggest and only standout difference between the two tools is the XPS cutting guide system that comes standard with the DWS780 miter saw, but isn’t available with the DWS779 miter saw.

This XPS system shines an LED light along the blade length, so you can make cuts with superior accuracy and efficiency. But this XPS guide system isn’t perfect, and one of the major downsides is that the shadow can be hard to see in bright daylight.

On a brighter note, the laser guide doesn’t need to adjusted or calibrated even after blade replacement. So, to answer the main question of which miter saw is better — the DWS779 or DWS780, for the significant roughly $200 price difference, the DWS780 is the same as the DWS779, but comes with the XPS laser system.

If You Prefer Cordless Tools

DeWalt make a wide range of tools in both corded and cordless versions. A great option for a cordless miter saw can bee seen her, where you can read our DeWalt flexvolt miter saw review. They are more expensive to start with, but once you have your batteries and chargers, the bare tools can seem quite a good deal.

Just to make things so much easier, DeWalt manufacture an excellent wheeled stand for either of these machines. With pneumatically assisted triple position adjustment, it’s the ideal accessory for this saw. Thousands of positive reviews from customers attest to this.

However, take note that aftermarket laser guides do use a separate power source than the DWS780 CUTLINE Blade Positioning system, so you will have to deal with two electrical cords rather than one. If you’d like to skip the two power cord setup, the Oshlun LG-M01 Miter and Portable Saw Laser Guide is a great option, as it is battery powered yet provides a bright laser line.