GreenWorks Pro GCS80420 80V 18-Inch Cordless Chainsaw is a “little beast,” according to one reviewer. 80V and an 18” bar are a combination that makes this saw a force to be reckoned with. 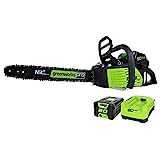 The GreenWorks unique DigiPro brushless motor is reliable and may be comparable to some 45 cc gas saws. The brushless design contributes to the excellent torque and long motor life since the internal moving parts are enclosed and protected from dirt and debris.

Internal overload protection keeps the motor from burning out. This saw also features steel bucking spikes, an electronic chain brake, and a metal wrap-around handle. The battery charges in a half-hour, and the battery and charger are compatible with several other GreenWorks tools.

What’s in the Box?

Included in the box are the saw, bar, chain, scabbard, tension adjusting tool (stored in the saw handle), and owner’s manual. The saw comes fully assembled.

How is the Performance?

First of all the power of this tool is phenomenal. One video reviewer felt this saw was one of the few battery-powered saws that would hold up against a gas saw for all-day use by a professional.

That’s saying a lot. The saw is well-balanced, quiet, has good run time, and the battery charges pretty quickly. Speaking of the battery, you can use a number of GreenWorks batteries with this saw.

Depending on which batteries you use, you will get varying charging times, but the 80V included with the saw takes about 30 minutes to charge fully, the batteries all use the same charger, regardless of the amp hours.

At just under 11 pounds, it’s not heavy, but not a lightweight either. Some reviewers mentioned the solid feel and ergonomic design as being a good sign of quality. This battery-powered saw is no toy.

Watching the online video reviews will give you a great sense of what size trees this saw is capable of handling. Several reviewers commented they couldn’t find any real negatives to using this saw.

One comment from the company item description made me smile. They actually let shoppers know that it’s normal for oil to seep from chainsaws when not in use. It is a fact that most chainsaws drip a small amount of oil when not in use.

Way to be proactive! 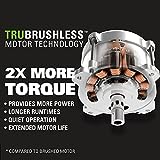 How Long is the Warranty?

That goes to show how much confidence they have in their products.

Downsides of the GreenWorks 80V Pro

The one major complaint about this saw involves the battery. The 2ah battery seems to be a problem, not holding power or charge long enough, not making enough cuts in some cases.

The 4ah battery that is standard with the 40V GreenWorks tools apparently has more power and better run time. There is an extensive online discussion about the technical side of all this, but it would probably take the trained brain of an electrical engineer to sort it all out. It is normal for higher Ah batteries to last longer.

Some claim that GreenWorks has an attitude toward those who complain about this issue, because they know it was a design flaw and an expensive mistake on their part. However, there were only a few that found a problem with this; most reviewers were very happy with the power, performance and run time of the saw.

It’s no doubt all in what you need the saw to do for you, and maybe what you’re used to in using other saws, perhaps even gas-powered ones.

As powerful as this product is, do keep in mind the fps is only 49. That does mean a cut will take longer perhaps, but this doesn’t seem to be a critical factor as far as reviews are concerned.

A minor complaint was the bar/chain adjustment. On the 40V, the adjustment is tool-free. On this model, however, there is a scrench included. Just a little bit less convenient on a saw with a lot of pluses, this is one negative that could be easily removed in the next generation.

Another item a couple of purchasers mentioned in their review was the GreenWorks bar and chain. Some recommend replacing those immediately with Oregon parts for longer wear and higher quality.

A few reviewers had trouble with the chain jumping off the bar. That issue might be corrected with different bar and/or chain, or it’s possible they had defective products.

And finally, some people had problems with the screws that hold the bar onto the saw. In some cases, the screws vibrated loose and were lost. The recommendation was to take a screwdriver and check to make sure they are tight before use or replace immediately once it’s out of the box.

Bottom line is that most reviewers love the GreenWorks Pro GCS80420 80V. For most people this saw was everything they needed it to be and then some.

If you’re planning on clearing acres of hardwoods, you might not want to give up your gas saw, but this model with its substantial power, decent run-time, and speedy charge time, was a winner for most online reviewers using it for light and some heavier jobs.

Those who had also purchased other 80V tools in the DigiPro line had the most to love, because they have multiple batteries, allowing them to always have a charged one ready to go.

Regardless of what brand of battery-powered saw you are considering, having more than one battery is always a good idea. But as far as battery-powered chainsaws go, this one is one of the best and should warrant serious consideration for the homeowner who has a significant need for a chainsaw, or for the professional who would like to keep a powerful battery chainsaw handy for less extensive landscaping or arborist’s needs.

This is a serious contender. 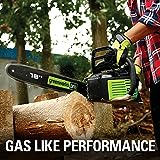