Not too long ago, the world was just getting used to the idea of a 7-1/4 inch cordless circular saw, and today, the options are virtually endless, ranging from 18V up to 60V boasting corded performance in cordless platforms. One of the models on the market that’s currently receiving endless praise is the DeWalt Flexvolt 60V MAX Brushless Circular Saw with Brake and 2 Battery Kit, 7-14”.

In this post we’ll be taking a closer look at the Flexvolt 60V Circular Saw from DeWalt. Claims make this unit out to be a full-size circular saw designed to be a cordless framing saw that boasts all the performance and capacities you’d expect to see in a corded saw.

Is this cordless saw really all that it claims to be? Read our review to see for yourself… 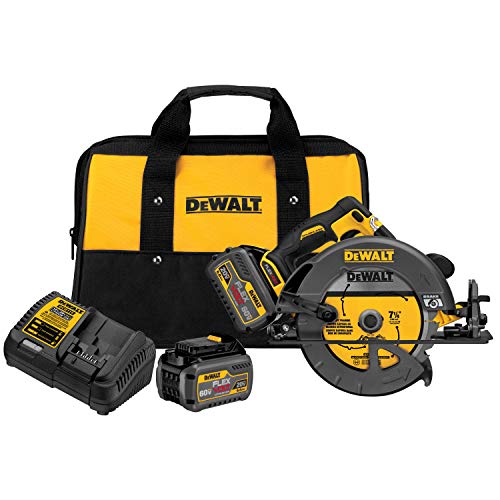 The obvious reason why this saw is making waves across the world is its power. Sure, the likes of Hilti and Makita saws deliver when it comes to power, but the DeWalt brand pushed our expectations through the roof since it’s a 60V, not just a 18V tool. Where others in its class are known to bog down, the Flexvolt 60V MAX really shines.

DeWalt has more than enough reason to make a big deal out of their DeWalt Tough slogan, and with their DSC575T2, it’s too evident to avoid. The saw has been designed to withstand a real beating, and it’s so durable, it will probably outlive you.

If you’re into the business of construction where there’s serious job site abuse happening on a daily basis, you can rest assured that the Flexvolt 60V MAX Circular Saw will never let you down.

What Is DeWalt’s Flexvolt?

According to DeWalt, their Flexvolt batteries are the first of their kind that change voltage when you change tools. The innovative voltage-changing batteries are suitable for a range of 60V tools to match, putting the power of getting things done quickly and effectively in your hands.

Being a right-sided blade design, the DeWalt Flexvolt 60V circular features a brushless motor. It has a battery that is backward compatible with the DeWalt 20V Max cordless tools, which is a great bonus to the deal, although you won’t be able to run your Flexvolt tools with regular DeWalt 20V batteries.

To operate the cordless saw; you’ll need the specific Flexvolt pack, but since the 60V MAX Cordless Circular Saw comes with two batteries included, it shouldn’t be an issue. 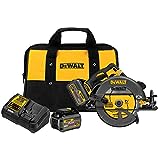 What Are Some Of The Best Features Of The DeWalt Flexvolt 60V MAX Circular Saw?

The ergonomics of this cordless saw are super impressive. While almost all the DeWalt power tools are ergonomically designed, the Flexvolt 60V Cordless has a particularly great handle design.

The contoured grip on the handle ensures that your hands easily wrap around it, and as if that isn’t good enough, the trigger itself is also super simple to use, although some might argue that a push-in safety isn’t the best design for comfort reasons.

When it comes to an objective conversation regarding any power tool’s ergonomics, one always has to raise the question of total weight. The Flexvolt 60V circular saw has a base weight of 8.1 pounds, but when you add the 6.0 amp hour battery, it has a total weight of just over 10.4 pounds.

With that total weight, it’s not the lightest power tool out there, but since you’ll probably always be using your circular saw on top of the material you’re working with, it shouldn’t be a total game-changer.

Does The DeWalt 60V Circular Saw Come With An Electric Brake?

The answer is yes, and to make matters even more interesting, this circular saw’s electric brake is very effective and stops the 5800 RPM blade much faster than you’d expect. It’s one of the saw’s most noteworthy safety features and does a brilliant job of protecting surfaces and preventing any injuries.

What Adjustments Can Be Made?

While one shouldn’t focus too much on the depth and bevel adjustments as key features of cordless saws, the adjustments on this saw are very easy to make, which is why we had to throw them in here. The circular saw comes with handy bevel detents at 22.5 and 45 degrees, which are perfect to help eliminate the typical guesswork when it comes to bevel cuts.

DeWalt has made a trade-off with the design of the metal shoe and adjustment pieces, however. The manufacturer went with gunmetal gray, more than they did with silver, which is a great looking addition to the finished look of the saw, but it also makes the measurement marking harder to see against the contrasting background.

Does This Saw Come With An LED?

Yes, and again, it shouldn’t be a determining factor when it comes to buying a cordless circular saw, but it’s definitely worth mentioning. The saw’s LED is perfectly placed and provides more than enough brightness which allows for use in even the worst of low-light cutting jobs. 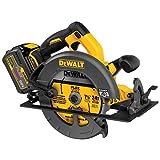 Is There Anything Lacking In This Circular Saw?

We would honestly have loved to see a rafter hook. We reckon this is a pretty big oversight since this is a safety and comfort feature that needs to be present on all cordless saws.

Users out there are rating the 60V MAX saw’s cutting as one of the most pleasurable experiences they’ve had with cordless saws so far. Some folks noted that this saw’s shoe has a bit more friction than some other saws in its class, but it definitely didn’t alter their overall perception of the saw.

We loved the fact that this saw offers power by the bucket load, and it’s just about perfect for any cutting application, being the obvious king of power when it comes to the competitors in the cordless circular saw game.

Thanks to the Flexvolt 60V batteries, you’ll be able to enjoy 2 hours of Ah power to work with. This saw sounds like a corded saw when in use, which is a big change to the game of cordless saws. It doesn’t only sound like a corded saw though; it cuts like one too. DeWalt lists this saw as a 15 amp motor with 1,600 watts of power, something that greatly enhances the overall experience and power delivered by the power tool.

What we love most about the DCS575T2 is the fact that it offers you perfect balance while working, and with its great sightlines and the easy to use depth of cut and bevel settings, this saw seems like it’s an absolute breeze to use.

What Versions Are Currently Available?

It is available in three different configurations. There’s the DCS575B, which is the bare tool in its case (which is easy to pair with a miter saw kit or the likes), and it also comes equipped with two Flexvolt batteries.

Then there are the DCS575T1, which comes with one battery and a fast charger.

Finally, there is the DCS575T2, which is the bare tool that comes with a two-battery kit. 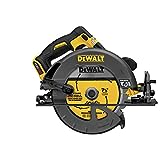 What Are The Key Features?

What Should You Expect To Pay For The DCS575T2?

After reading through the specs and capabilities, it’s only normal to expect a bank-breaking price tag for this circular saw, but that’s where you’d be dead wrong. When it first started retailing, the DCS575T2’s price was around $399, and that was for a kit that contained a storage bag, two batteries, and a charger.

The price hasn’t changed much over the last year. Along with the kit, you also get a Flexvolt 7/14” blade, optimized for performance on cordless platforms. We reckon that that’s some unsurpassed value for money.

Advantages Of Using The DeWalt Saw

DeWalt’s Flexvolt 60V MAX is a great full-size 7-1/4” cordless circular saw that doesn’t lack in the performance or power department. It was made to withstand abuse on a daily basis and will happily tackle the most rigorous of tasks you put it up to.

Based on the numerous positive reviews from users across the world, this is a force to be reckoned with since it acts just like a corded unit. For the most part, we were blown away by the saw’s abilities and power, not to mention its seriously attractive price tag.

With its high-quality build, its powerful performance, and its wide range of useful features, this is arguably one of the best cordless circular saws currently available on the market.